30 people were burned to death in Binjai Matchstick Factory 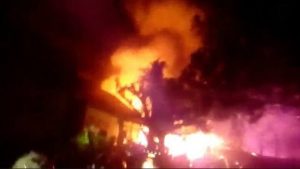 A total of 30 people were reportedly killed by the fire of a gas lighter fountain factory, three of which were children. These children are the children of the workers who were brought to work. Fires occurred in 4 villages which are Sambirejo, Binjai, Langkat and North Sumatra.

The incident occurred in a permanent house of 5 × 7 meters in size. These victims were allegedly trapped there. They were workers for home industries who make both the gas and lighter. All of the victimd were trapped by the locked door, as reported by voice.com.

Five fire engines were deployed to tame the red rooster. Langkat BPBD estimated that there were no survivors.

The bodies of the victims were evacuated to Bhayangkara Hospital, Medan on Friday to be identified as tthe corpses were all in charred condition. The death toll consisted of housewives and children. The fire was said to appear around 11:30 (west Indonesian time) Firefighters managed to put out the fire two hours later, around 13:30 (west Indonesian time).

The cause for the fire in this home industry has not been known with certainty. Based on the circulating information, there was an explosion from the house earlier to the Friday prayer. The owner of the home industry is to be investigated soon.